During the Easter school holidays we stayed at a holiday home at beautiful Jervis Bay on the South Coast of New South Wales. Seven days of relaxation and s.l.o.w. Two adolescents, an I’m-almost-done-with-six-and-don’t-we-know-about-it and a four-year old human tornado (aka The Boy) does not really mean relaxation ever happens except in precious little instances. But slow we can do; and slow is probably as close as we are going to get to relaxation for the next decade or so.

Normally, preparing the family meals is a complete and utter exhausting chore that just has to get done – in our nasty little flatpack kitchen with its horrible stove and non-existent pantry – so kids can get to drama class or Girl Guides or into the bath or into bed. But for some reason, on holidays, cooking in a small kitchen (or when we’re camping, under the stars) is a joy.

Slow, I think, is the secret ingredient. Time to relish and savour. And an appreciative audience of hungry mouths.

None of what we simmered, baked or sautéed is terribly groundbreaking. The ingredients are mostly thoughtful, sometimes merely pragmatic: Wollongong-made pasta; grass-fed beef from down the coast purchased from our lovely local butcher, who greets me by name and dices the steak for my casseroles or rolls up a nice roast for a party; organic parmesan and local organic milk delivered by the milko; the rest from our fruit & veggie box, Woolies or the local IGA here at the Bay; but all are easily obtained (for a stress-head mother of four that means absolutely no traipsing around farmers markets with a crush of hipsters, heavy bags and over-it little ones, however much I’d like to!). But, as Maggie Beer says, it’s cooking from the heart, with time to spare.

So, five weeks’ later with el relaxo completely swamped by school/work/house, here’s a kind of recipe for the sort of good-without-en (as Mum refers to it) holiday cooking from the heart.

Roast Pears and Apples (not quite Pears Belle Helene)

This is for six-ish. Normally I do this as baked pears with vanilla and cream but I forgot to pack the vanilla seed syrup and felt like adding some apples, so . . .

A few pears, especially ones with bruises that need eating quick smart, maybe a few more

A few apples, red are lovely but use whatever you like best.

Don’t bother peeling the fruit but cut out any manky bits that offend you. Quarter and remove seeds. Add some more fruit if you can still see the bottom of the dish, or you feel like more fruit.

Place in a big baking dish. Earthenware is lovely. Don’t bother greasing it.

Now peel a few decent-sized bits of orange rind with a vegetable peeler or knife and add that to the fruit. Drizzle over some maple syrup, by which I means a good slosh you can actually hear coming out of the bottle. Then, sprinkle over a good few dessertspoonfuls of brown sugar and dot some chunks of butter on top of the fruit. I like to use a good bit for richness. I prefer to use unsalted but use whatever you like so long as it is proper butter.

Bake, uncovered for about 30 minutes in a moderate oven (about 180-200 degrees). It should cook beautifully in that time if the fruit is in one layer. I made the mistake of using a smaller dish a some weeks ago and it took forever.

The fruit will be delightfully soft, and if your oven is hotter than you thought, you’ll have the bonus of a lovely golden skin.

Finish off with a swirl of cream (thickened, pure, organic, just milked, whatever) and then serve.

I’ve been enjoying exploring the world of variously raw-clean-vegan-whole foods (I’m a curious omnivore). There are really creative cooks (or whatever the not-cooking version of a cook is), with a passion for healthy, delicious food that doesn’t mess around too much with the basic – fresh and unprocessed – ingredients.

I quite like that. Throwing a few frozen bananas, some natural peanut butter, and a dash of cinnamon and maple syrup in the trusty Magimix to whip up “icecream” to go with my standard fruit platter for the hungry hordes post-school, is ideal, for someone who’d rather be gardening, is supposed to be working and should probably be vacuuming the remains of yesterday from under the table. Anyway, now the big kids do it themselves if they feel like an creamy icy fix – what’s not to love?

I’m not entirely convinced that a frozen squishy mix of vegetables, fruits and the seemingly inevitable coconut oil qualifies as cake or cookies or pudding . . . but some creations are truly delicious and pretty convincing alternatives to the traditional treats. Like the Vanilla Slice from Wholefood Simply. Incredible. 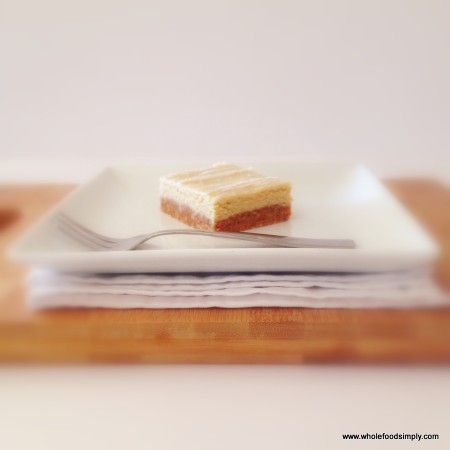 The best thing about this non-fussy approach to food – besides how easy it is whip something up – is the (mostly) unadulterated tastiness of real, healthy food.

My current favourite place to find afternoon tea treats is Wholefood Simply and I also love The Healthy Chef, My New Roots and Plant-based Munchies for everything from breakfast to dinner.

I came across this recipe for banana cookies on the book of face recently that was just right for the daily afternoon mummy-energy-slump v hungry-hordes battle.

It’s simple, fast and free of stuff you might want to avoid like grains, sugar or dairy. I  tweaked the original and doubled it, as you do.

Here is my version:

Chef’s pinch of cinnamon (a generous three-fingered pinch my big girls and I adopted after a cooking demonstration we went to – particularly for salt, uh-oh!)

Mash the bananas, mix in the oats, cinnamon, vanilla and nuts. Drop spoonfuls onto a lined baking tray and bake for 12-15 minutes at 180 degrees.

Makes enough for four ravenous kids and one afternoon-slumped mummy.

I am going to try some variations next time: drop the nuts and use a mix of seeds – sunflower and sesame are always yum; a slosh of maple syrup instead of vanilla; adding dates.

Grandma (and Grandpa) wisdom will change the world.

Well, some things. Like making do, making your own, mending what’s broken and saving up for something. And playing the piano. Or bowls.

I was blessed with two Grandmas I grew up knowing and loving dearly. They taught me lots about how to live and love, in their own different and precious ways.

They both lived through the depression and post-war rationing, and knew first hand what it was like to go without, although they never had to raise a family without a wage-earner as many women did.

Grandma Molly was the kind of lady that everyone loved. She had an enormous heart (despite its physical weakness) and an incredible zest for living. Even when her body was falling apart, she never stopped being interested in life. She was definitely the life of the party, and could knock out a tune on the piano for Grandad Reggie to croon along to. There’s no doubt her spirit is alive and well in my extended family!

Grandma Joan was a great cook (and doyenne of the lawn bowls green). When they lived on the farm she cooked everything on the wood-fired stove. Coming from a blessed realm of electric fan-forced multi-function oven with actual thermometer, wood-fired everything doesn’t sound so hip. There was always something delicious to eat at Grandma’s – real Melting Moments and Monte Carlos, cakes and slices. Grandma knew all the classics, of course, but certainly wasn’t hide bound when it came to trying something new! Everything was made from scratch and her skill and high standards were passed down to Mum, Auntie Ann and Auntie Trish.

So, I am the lucky inheritor of a taste for great food, the ability and expectation to be able to make it myself, the experience of a welcoming and generous table. And the importance of doing something you love – whether it be lawn bowls or bringing out the piano and forte in the pianoforte.

Eating well is not really about eating gorgeously-rich and decadent food (I have no problem with that!). It’s not simply eating fresh, real food. Or being conscious about how our food is produced, how it impacts on living creatures, the natural environment or other people. All those things are important ingredients – even the occasional decadent indulgence – to eating and living well. We need to nourish our bodies, not just fuel them.

Grandma Molly knew to put off her diet for another day and enjoy the special feast. Grandma Joan knew the value of good food prepared with love.

You are what you eat. And a little of what you like will do you good.

And don’t forget a dash of music and a game of bowls.